As we know, Shopify has it's own way of adding the Google Analytics code (the box in "admin/online_store/preferences") which is relly handy.

BUT, when adding Google Adwords Dynamic Remarketing to a Shopify site via *Google Analytics Tag*, do we?

a) Remove the GA account code (UA-XXXXXXXX-X) from the box in "preferences" and put the entire GA Tag (complete with the extra Dynamic Remarketing code) into the head in liquid files?
- My concern is that unless I delete the code in the native Shopify GA box, it might duplicate it or cause double firing.

b) Keep the GA account code (UA-XXXXXXXX-X) in the "preferences" box but ALSO add the additional Adwords Remarketing code into the Additional Scripts box underneath.
- My concern is that it may not be in the correct format.

Exactly what the extra script for this on Shopify should look like (I haven't done any tinkering with Shopify, so whatever the default is).

I think it's something like this... but I'm not sure how this fits in with the rest of the code, and which bits go where, or how it should be nested with other code, given the issues raised in Question #1.

I've completed the end to end instructions to do this from Google that live here (I am following the "retail" vertical), it's really just the positioning and formatting of the script in Shopify that seems to be very difficult to pin down.

There is another post on this but it's so old, long, conflicting and confusing that I was hoping for a fresh definitive answer from someone who has successfully done it

One final thing, please don't send me to the help articles about using Google Adwords and Shopify for Dynamic remarketing as I need to use Analytics. Also, I would rather not have to implement Google Tag Manager as that's just another thing to have to learn, debug and fiddle with when I'm sure there must be a simple native solution to this in Shopify. The Shopify customer service reps don't know so directed me to post in the forums :)

Thank you so much for any help you can give me and all the other people that seem to be struggling with this.

I know you're specifically asking about doing this via Google Analytics, and that therefore my answer doesn't answer your question, but I've decided to implement dynamic remarketing using the Google Ads gtag script way. Doing it via GTM or GA simply required jumping through too many hoops (although it is possible).

Here is how I did it:

Hope this helps and good luck! :)

I have the SAME issue as you. And I can't find ANY detailed information on how to set up it using Google Analytics tag.

Maybe you already have the setup? and could share it with me, please? :)

Fellas, I've written step-by-step how to do it for analytics with Shopify in my Google Shopping book.

Thank you so much for your guide. I just implemented the code into our website and validated it with Google Tag Assistant. It shows that the re-marketing snippet is sending 2 requests and they are the same. This is how it should be? Screenshot attached. 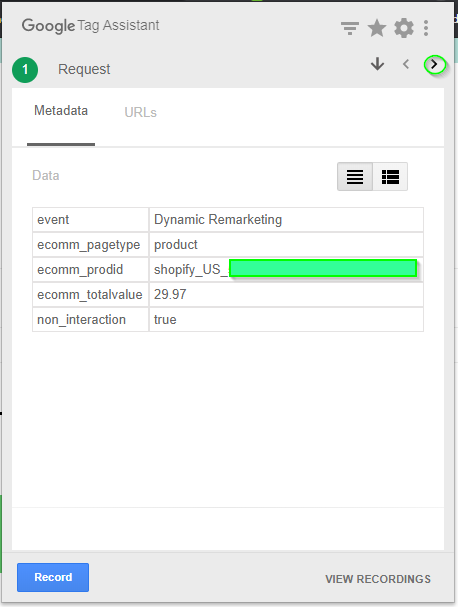 @Domakis You likely have implemented another Google Ads remarketing code somewhere. Be sure to remove it first. If you've got no idea how to find this, paste the store's URL here.

I have found Chrome's tag assistant problematic in validating a tag setup. It has never validated for me with any client's Merchant Center. Having said that, you should not be having two remarketing codes implemented. The Audience Insights in Google Ads is a good way to confirm setup with manual checks. We have noticed it can take 2 weeks for Google to correctly report it as working in audience insights. Their audience diagnostic tool in that regard is bad.