Client checkout shipping location via map pin or something like that in countries without addresses?

Hey man, as a tico who moved down there in 2017, I can assure you it wont work. I moved back to the US because of it.

The system is antiquated in CR, and the mail system is some of the worst in the world due to exactly what you said, no real address system in place.

Just forget about even putting the effort in to finding a solution.

Whats worse is, even shipping to the US is a pain, takes 14-25 days to arrive, most my stuff was stolen by shady customs people, then there's receiving mail, which, as im sure youve found out, they arbitrarily charge you whatever tax they want to at customs, It's just s shtshow down there. Absolute 3rd world postal system.

I ended up shipping my inventory back to the US and having my sister help me shipping stuff out, and costa rican sales, I just did hand to hand meeting up at the central park in whatever town someone wanted something from me in. THATS the only solution I found, and after 2 years of living there, I got fed up, my business took a nosedive because of it, so I left. I now just visit whenever I want but live in the states again.

Also, if you are not a citizen, and you're caught doing something like that..."running a business without going through the proper channels" it's illegal and THEY WILL BAN YOU from the country. Trust me, My friend was caught selling merch in Jaco, a cop placed and order, met up with him, he was booted and never allowed back into CR. So use caution, they dont play games when it comes to you earning a living as a foreigner down there. THEY DO NOT WANT YOU TAKING TICO MONEY UNLESS YOU ARE A TICO.

Best of luck to you, but shopify will NOT ever work for you down there.

Could you explain how to automatically fill the address in checkout with coordinates you retrieved from the map?

I have changed via Javascript the button permalink. And then you use these parameters: https://help.shopify.com/en/themes/customization/cart/use-permalinks-to-preload-cart

Kamal_Moha
Tourist
7 0 3
Hey guys, I'm in Uganda(Africa) and I also greatly face this issue of not being able to locate the people who have made an order on the Website as the Address system is bad here.
But being able to auto-populate Road/Street Address from Google maps is something very useful.
It will super awesome if there is a way to integrate Google Maps & Shopify so that you can easily locate your customer and quickly deliver his product to his House.

This is something very important for everybody using Shopify and I would love to get anyone's help on this issue.
3 Likes
Reply

martinhalik thanks a lot for your great example.
Have you seen some other examples of implementing this feature?

Saw your shop's cart, nicely done. I also wanted this geolocation to work in my checkout page because from where I'm, address is a challenge.

I went through your javascript & tried to edit the codings in my theme, didn't quite work out, its a Supply theme from shopify. Can you further advise on this? Thanks

Hi. How does to it cost add to my shop this add-on. I live in Panama and need to  know the location of my customer at the shopping cart. You can contact me at jeperaltag@gmail.com and see my store at https://foodmar.me

just recently I have developed something similar for Meat shop in Abu Dhabi. Since you can't edit checkout process, I've implemented the map on the cart page and passed coordinates as checkout attribute to shopify order. UX is little worse, but it might work for you in the end. 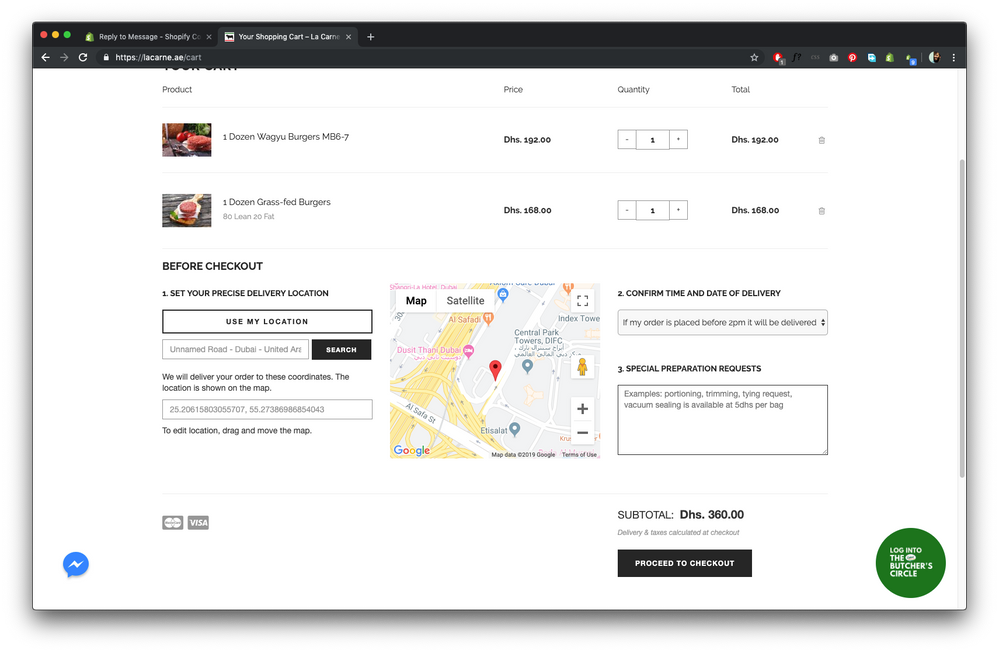 dankykk
New Member
1 0 0
Hi Martin I am interested in that solution of the map before checkout.
How can I contact you?
0 Likes
Reply

You can reach me at agency e-mail shopify@soundsgood.agency or directly via martin@ents.co, but in both options, I do this work under the Soundsgood Agency brand.

This will be very useful for Ghana (West Africa) where address is best given via google maps/whatsapp coordinates*. Please help.