Seems the issue has been resolved and I'm seeing incoming calls for the carrier service again.

I have reported intermittent carrier shipping failures to Shopify support 6hrs ago and it still appears to be happening.

There is no pattern to the failures other than repeated requests to the carrier service endpoint in the checkout process.

Because of the random nature, it would appear there is a fault in the pool of servers making requests and I don't believe it is isolated to just USPS as I am seeing all of my shipping apps experience the exact same behavior.

QUESTION: Who runs their carrierService endpoints on AWS? I do. Wondering if that's the issue here.

I've been talking with Shopify Support. I've been pointing them to this thread, so keep posting in here as long as you're experiencing this issue. Those of us who use carrierService will be ignored, as I doubt there's many of us, unless we keep up the pressure.

With that said, support has been attempting to see if it's my app causing the problems.

My app works as follows.

It's a simple nodejs function running on AWS Lambda. It does not contact any remote carrier to get prices, and essentially calculates shipping prices based off weight in 10 gram increments.

It's completely stateless and doesn't do any database or CURL calls. So there's really nothing to make it "not work"

I've also been running it for 2+ years with only rare issues.

Additionally something similar happened to me roughly a week ago for 1 hr. No errors in cloudwatch, but what I do see is NO CALLS TO AWS lamba. My stores are busy enough that this doesn't happen. I do notice it happen, when my customers are complaining about "shipping not working" though. I'm having the same problem here, where I'm not getting calls to AWS Lambda. 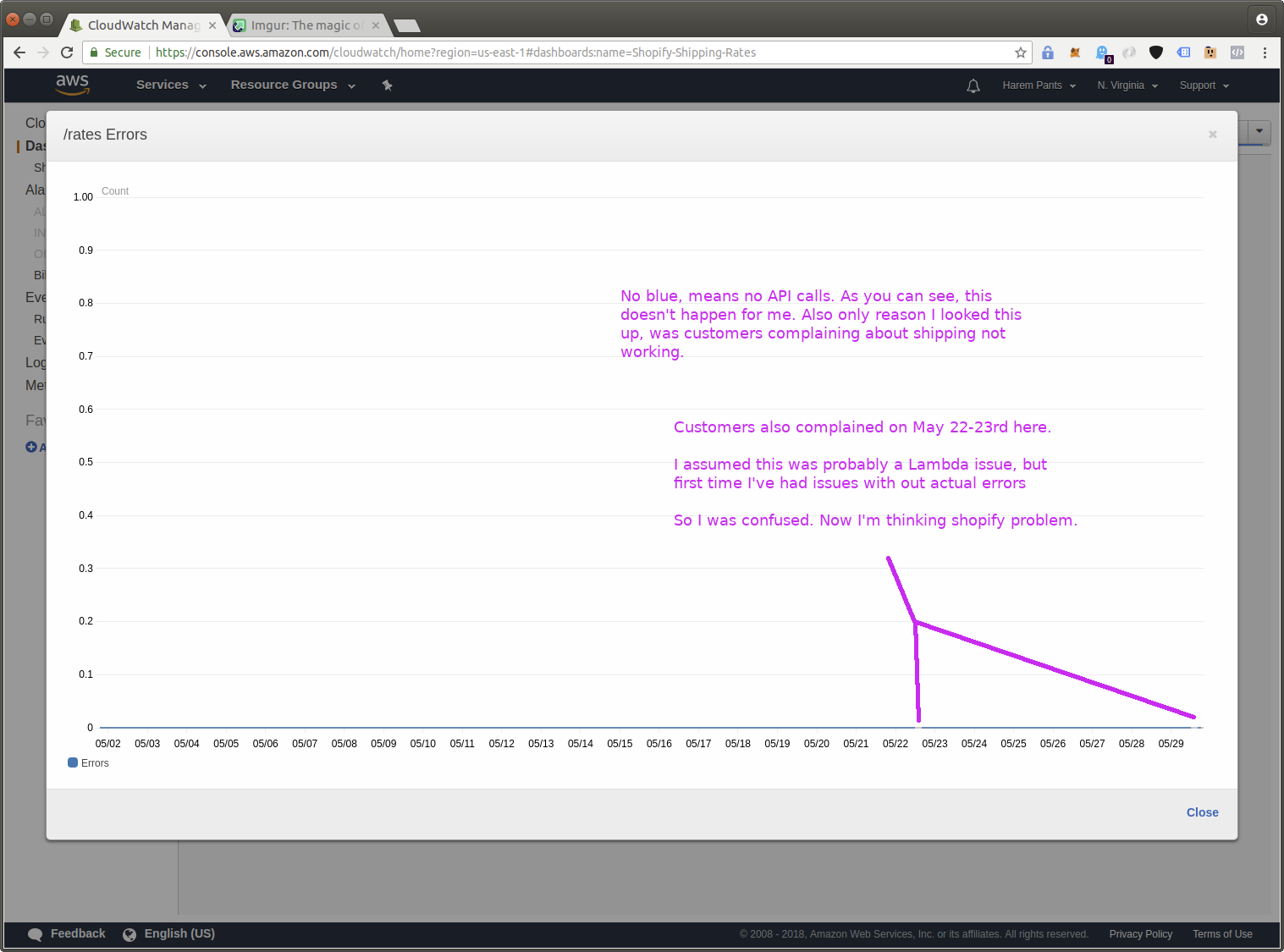 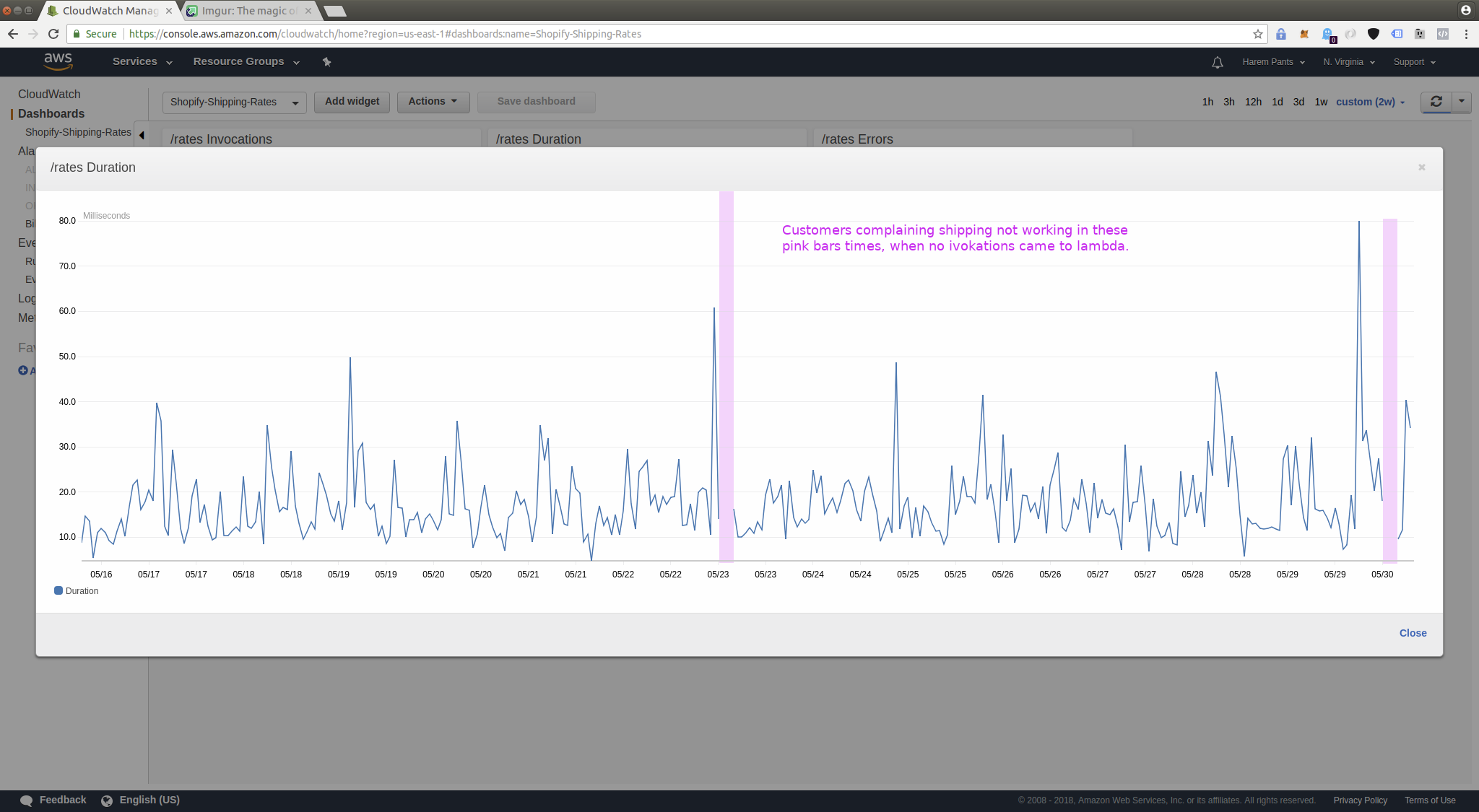 Our apps are powered by PHP/MySQL.

They make a number of database calls and some make external curl calls.

They are running perfectly and we do see some carrier requests that are making it through.
However, a large number of requests appear to be failing to hit the carrier endpoints.

I'm on OpenShift in an US data-center, however they sometimes use AWS nodes, so unclear exactly where the actual node is located. Using their built-in SSL sertificate.

Thanks for continuing to contribute to the thread. The fix intended to mitigate the issue possibly has not worked as well as we'd hoped (provided this can be tied to the same cause), so we're looking a little closer. Please continue to add information to this thread, it's immensely helpful.

Thanks for replying to this Alex.

I'd prefer to be notified here with regards to my support requests to assist others, rather than privately via email.

Please keep us informed with the progress of this fix, so that I can know when I'm able to remove my temporary fix of adding some flat rate shipping rates.

It seems that there's a wide array of implementations, not all of which use AWS, thus this is not issolated to simply those of us using AWS.

Will do, it's definitely more efficient this way. Any outlier issues that aren't necessarily related will be delegated to their own support tickets, but we'll continue discussion of the issue at hand in the open here otherwise.

Do we have a resolution for this yet?

One of the shops which was in a non-working state, then started to work right after the USPS issue was resolved earlier, now seems to not be working anymore.

Why is status.shopify.com reporting 'All Systems Operational'? Please create a new incident if the USPS situation is resolved - Alex?