Recharge subscription app that impacts what is being charged to customers

I've found an important bug that potential impacts every single shop owner that uses ReCharge. I am saying this because I'm not using "stock" ReCharge without any customization from my end, was able to reproduce it on two different store, each with different payment processor just to rule out a given payment processor from being the culprit. I used Stripe on one store and Authorize.Net on the other. The bug's behavior is identical in both cases. So the only shops that do not risk being impacted by the bug are those that do not ever use discount code/coupon code in ReCharge's checkout page. All others are at risk.

This is best explained with pictures, so I'll do so here with images taken from both stores.

Step 1:  You purchase a subscription and you go to the ReCharge checkout page. Look at what your sub-total currently is. In the case below, it says: $67.50 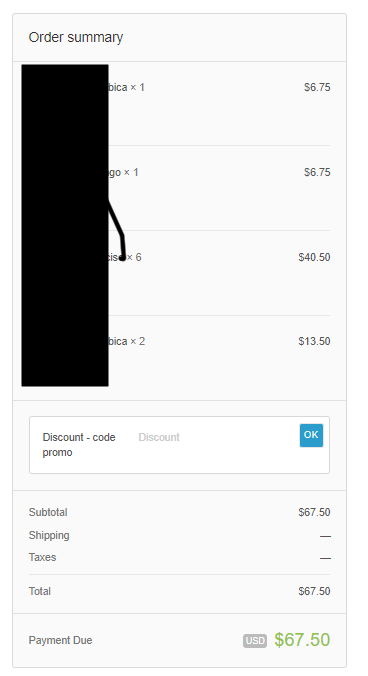 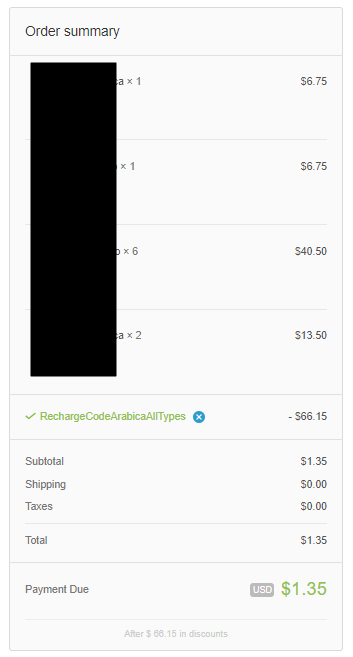 Step 3:  Do anything that you need to ensure that your payment will show "Card Decline Error" when you click on the "Place my order" button from the ReCharge checkout page. You can use a bad card number like 4999 9999 9999 9996 to trigger this but there are other ways too. 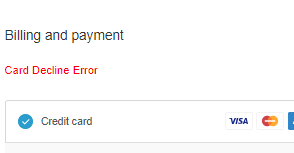 Step 4:  After the card error, the discount code still shows on the screen but it is no longer applied on the subtotal so instead of paying $1.35 the customer will end up paying $67.50!  I picked it up because I look for these things as part of my job. But after a failed transaction, the average customer's attention won't be on the right part of the screen to see if the discount vanished (why would it be anyway?), it will be on the left part of the screen to look at the error message in red and he will focus on entering the proper card info and will push "Place order now" and be charged the wrong amount. 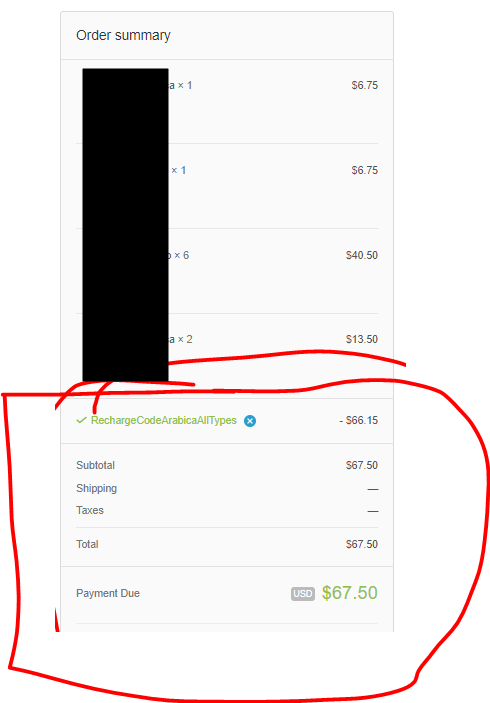 after the card error, the discount code still shows but it is no longer applied on the subtotal

As previously mentioned, I have performed the same test on another store and this one used Stripe instead of Authorize.NEt as the payment processor but the outcome is the same. 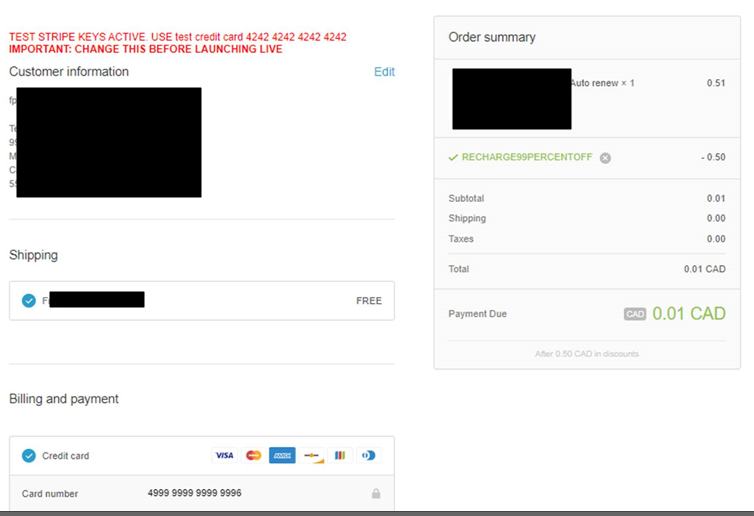 Example on other store step 2: We enter a bad card to generate a "Card Decline Error"  which triggers the ReCharge bug. Here too the discount code is visible but is not applying anymore following the error so the sub-total goes from just $0.01 prior to the error to its original $0.51. 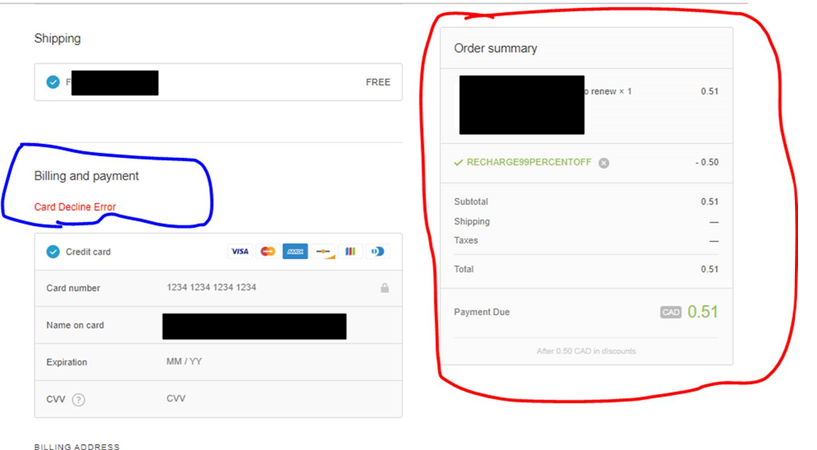 OTHER BUG BUT NOT AS SEVERE AS THE ABOVE

I have found other ReCharge related bugs that impact Shopify too. For example, whenever an order is completed, Shopify sends out an order confirmation email to the customer which contains a "VIEW ORDER" button which when you customer clicks it, it brings him to a Shopify page like this one below which appears as it should because the order in the picture below was for a one-time order so it used Shopify checkout and not Recharge. 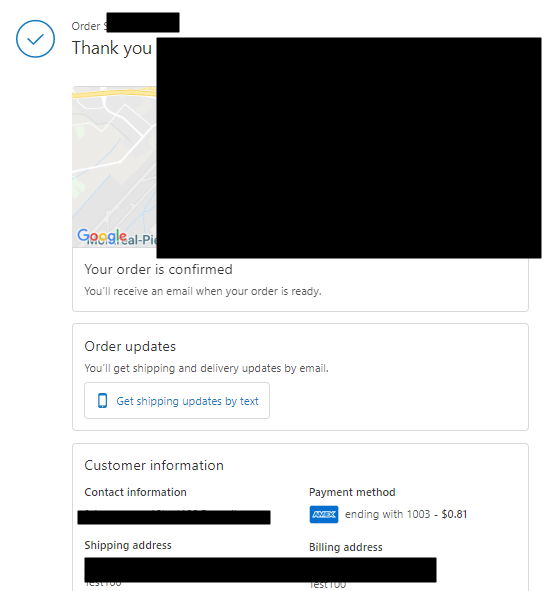 This next one is from the same store but it is for a subscription order. Pay attention to the content shown in the PAYMENT METHOD section. This might lead some to think there is something wrong with the Shopify template but as show above, the template is fine if the order was not a ReCharge subscription. It is only in the one below that the payment method shows a weird error message. 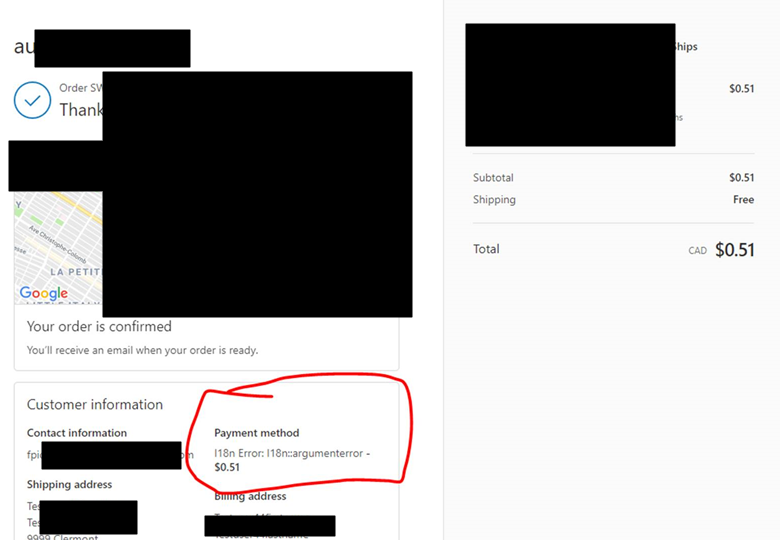 Subscription orders are messing up the payment method section

I've previous been communicating issues directly to ReCharge support without coming to publicly to this board. For example, when I told ReCharge that during one of my test in which I purposefully enter a bad billing address during Checkout, Shopify returns a error message that is useful like "The address does not match what the card issuer has on file" or something along those lines. But when I do the same test on the ReCharge checkout it just gives a generic "Card Declined Error". I always test for this because it is a very common error as often customers enter their shipping address.

ReCharge acknowledged the situation but said that this was not a high priority for them. While it was a minor irritant because I know it would not require much programming to return the payment processor original error, I did not take any action because it is not a BUG for just something that would be an improvement.

But the discount value not being applied to the sub-total is a major bug that potientially impacts all stores. The reply I got back from ReCharge with regards to this one is shown in the next screenshot. 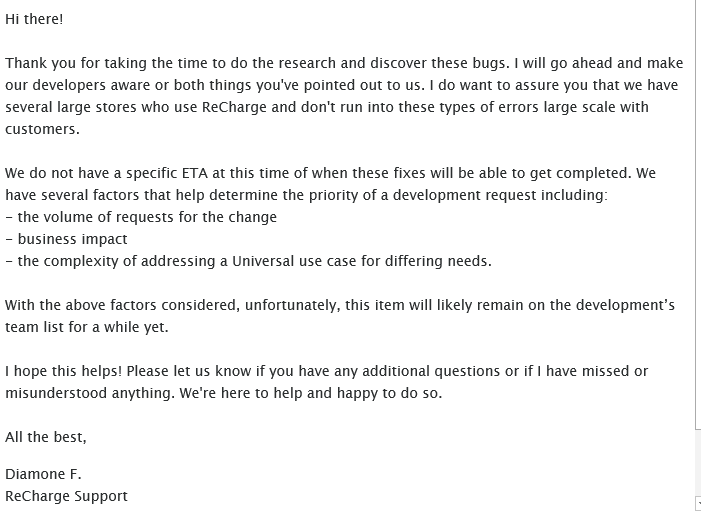 So despite the bug's financial and brand damaging impact, ReCharge basically says that it won't get fixed anytime soon because not enough people are complaining about it.

So I am asking all of you to start complaining about it. Don't do it just for me. if you use discount code on your store, then you too are being impacted by this bug but might have simply not realized it until now.

The bug is that the c

One bug is so.

Hi Francois thank you so much for contacting us on this. I've investigated the zendesk ticket history and sent you a follow up email to hopefully improve or resolve some immediate concerns.

Specifically the discount issue you mentioned appears based on my investigation to be a display-only issue. The charge amount is ok per the payment processor and the shopify order, it just didn't show the subtraction properly after the checkout interface was reloaded subsequent to the charge decline.

We of course want to avoid any source of confusing information and we'll evaluate what happened such that this was not escalated and make sure it gets fixed promptly. I've sent you diagnostic information from the payment transaction and your test shopify order in order to provide verification for how I've confirmed that its a display-issue.

I've also sent information related to the information display on the confirmation email you mentioned. We have a resolution for making it display properly which has been applied to all new stores for a few weeks, and we have been back filling on existing stores. We'll get that applied on your store and to my knowledge that will resolve the email issue.

Thanks again for letting us know about these and my personal apology for the stress this caused given that we didn't fully make sure we understood the nature of the issue that was being brought up. In addition to continuing to work with you to ensure all your issues are resolved, we'll evaluate how we can investigate, assess and communicate the nature of a reported issue more quickly and accurately, as well as ensure we prioritize the timing of updates/fixes accordingly.

First, I want to thank you for looking into this. But as for the bug being cosmetic only because the transaction you saw for it in Authorize.Net there might be a factor that is misleading you on that point. This is because after I’ve noticed the bug, I did not try to save with the bad sub-total value. I hit the back button on the browser and just reapplied the coupon code.

Here were the steps.
I had the card error and noticed the bug with the discount code.

I tried to remove the coupon and reapply it but as you can see in the screenshot below, it was not letting me, another little bug. 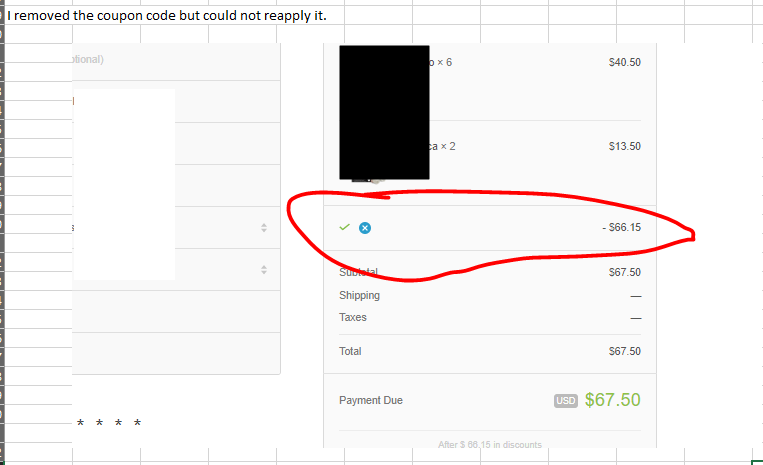 Not seeing what else I could do, I clicked the browser's back button so I'd have another chance to apply the rebate. I lost the billing address I had entered but I was able to enter the discount code one again.

After the above, I’ve received the success message where I noticed a minor cosmetic bug with the ReCharge checkout. In Shopify my orders are configured to have a suffix of “SU1-“ and a suffix of “-A”. This is displays fine on the Shopify checkout success page but on the ReCharge checkout success page instead of showing “SU1-1006-A”, it is only showing “1006”. As I said, it is only a minor bug that does not really harm but I thought I’d bring it up for the sake of thoroughness. 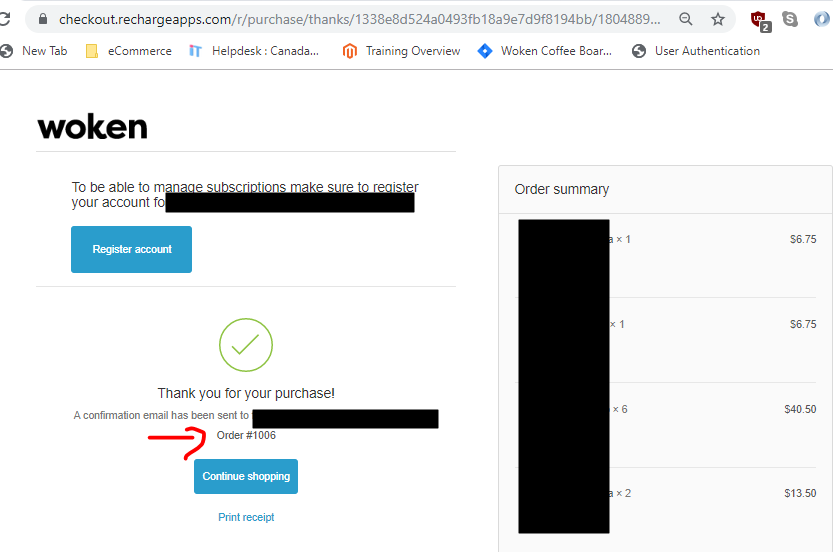 Hope this helps you as you work on the fix.

Just updating this thread to say that Mike from ReCharge has made the necessary corrections and this works fine now.