Dear @Ranes I am glad to let you know that I have found the solution for this issue and I have reported it to Shopify as well.

It was an application called enzimify which infected my store. 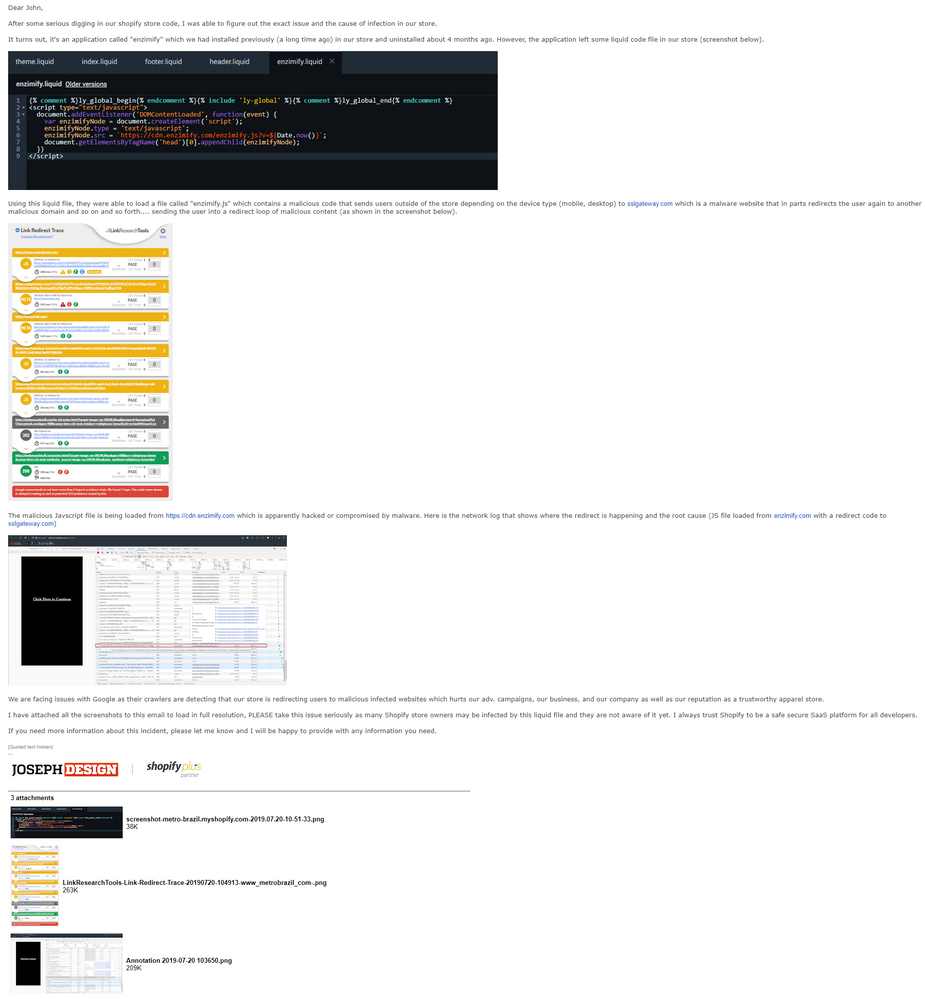 Thanks for sharing the update on this @Ranes.

Glad to hear someone is working on this for you but as you mentioned you will hopefully learn more about all of this.

The provided screenshot was  a little difficult to read, but was helpful.  I am pretty sure our issue was similar.

My dev thinks our issue might have been with the "Sales Pop by Beeketing - Recent Sales Notification Popup" plugin.
> Not saying it is, not saying it isn't.  Just saying it was a suspect in our case.

This is the plugin that pops up to let a customer know when a purchase has just been made.
> Example from a Google Search:

My dev commented out lines that included enzimify.js and bk.traking.
Lots and lots of page loading and nativiation using Chrome and Brave in Mobile view and we didn't get a redirect.
(Side note:  It was difficult and time consuming to get redirects, but I think it might have happened in Brave a little more often than Chrome.  Interesting)

After a couple of hours of attempting to replicate, the dev removed the App under the App section and deleted the bk-tracking.liquid file under Snippits.
Continued testing this morning, and still no redirects yet.

Now it's time to contact Google and ask them to run their crawlers.

Many thanks for the responses.

I have Beeketing app as well, you just need to remove the "enzimify.liquid" and it will be enough to fix the issue.

Anybody here can help me resolving a very similar issue as mentioned here.

I have been banned from google ads because I have 2 links that affecting my site. I have contacted choppily and they said nothing is in there, i have asked different developers telling me nothing is in my site, but google keeps rejecting my ads. what can be done. thanks for the help

Can i call you?? i need to get some help but need assurance who i am talking to.... i have talked to so many people that had asked me for my info. i am just being cautious here but defiantly i need HELP..

Sure you can, you can contact me through https://designs.josephr.mobi/shopify/

Will be happy to help

Please, someone found any solution to this? I'm having the same problem with Google Ads because they say my Shopify is infected with malicious or unwanted software. Nobody from Shopify can help anymore and I don't want to migrate the whole website after months of work :/

I posted the solution above, it's probably one of the apps you have installed.