Yess I got the answer.  So I hope you can solve this issue for me?? I think this is very important for european sellers, like me!

Hi,
thank you for reaching out!

Because of Shopify restrictions, the product’s name and custom payment/shipping info cannot be translated on the checkout page and will always show up in your base language.

Would you be able to confirm with Langify if the cart can be translated rather than the checkout? I think they might have gotten mixed up with the two. The reason I'm asking is that the checkout cannot be modified but if it is the cart, it can be.

Would you be able to confirm it is the cart you are asking about, as that's what I thought it was from your screenshot, and ask Langify that, please?

Hello,
The cart can be fully translated and the checkout for most parts, except the ones my colleague Francesco listed in his email.
If you haven't already, please have a look at our langify examples to see how the checkout translation works.
Best Regards,
Vera
--------------------
0 Likes
Reply

Also give a look to this shop, exactly the same problem with translation products into cart. How shopify can solve this conversion killer?

I spoke to our themes team directly about this to try and find out more details for you. They mentioned the field which is being used for the product title is`{{ name }}` there is handlebars.js which proves more difficult for translation apps to translate fully, and on the ajax cart (which is what you're trying to translate) as it isn't liquid tags pulling information directly from the product JSON file. If Langify is also able to confirm that they indeed not able to translate this field (ajax cart) then it will need to remain in the language that the product title set as.

Something to note is that there is a new multilingual API being rolled out to the partners and app developers in the near future that will give them more access and be to have access to translate available liquid tags.

I'm a developer building a custom Shopify theme for a store that requires two languages: English and French. I'm wondering if you can provide some guidelines for how to make this possible. I've already evaluated the two most popular Shopify apps for the job: Langify and Weglot, but neither offer a 100% solution.

- Injects custom code into your theme's Liquid templates, I can't help but worry that it will yield unpredictable production-only issues.

- Requires domain redirect to be disabled to use separate domain (leveraging SEO).

- Every time the theme is updated, a "refresh" is required so the custom codes can be injected again. This process is very slow.

- Extremely hard and painfully slow to manage translations. The app scans the website for all translatable texts, then it's up to the user to manage and organize them. It is possible for a single passage of text to be broken into chunks due to HTML markup layout, making it inaccurate to translate.

It doesn't seem like apps by nature can truly support a store operating in multiple languages. Notice that both apps have a common issue, that they both break search. And obviously that is because the name and description of the product exist in a single language only, so nothing will turn up if you attempt a search in a different language.

Since apps seem out of the picture, I thought about creating two stores, one per language, like what some people have suggested. Obviously this approach is not desirable because that would mean having to maintain 2 stores rather than 1, and the very first issue I can think of is keeping the inventory in sync, since both stores will share the exact same product inventory. I found some top apps for syncing inventories such as Syncio, but it is unclear whether the products can be in sync while having different names and descriptions (because they are in different languages). The answer feels like a no.

My question for you is, with the aforementioned concerns that I raised, what is the most recommended way to support multiple languages? I'm a bit disappointed that this is not a built-in feature because Shopify is a Canadian company, and I'm building a Canadian storefront, and Canada is a bilingual country. Does Shopify have plans of supporting multiple languages natively? I stumbled across this doc (https://help.shopify.com/en/api/guides/multi-language) and it almost seems like there exists stores with multiple languages? But at the bottom of the page it mentions that in order to test multiple languages you need to enable developer previews. It's not entirely clear if this is an existing feature, or an upcoming feature, or whether it's talking about something entirely different. If possible, can you please clarify?

Thank you for your feedback and detailed message. It really helped break down exactly what you need and why you need it while showing how it impacts your clients business.

How you would go about supporting the multi-language really is up to you or your client. I know that probably sounds like a cliche answer, but as it stands the best ways would either be via one of the apps or by having two stores.

Regarding your question about developer reviews and the section towards the bottom of the help document.

In saying the above, when you create a development store, you have the option to enable a developer preview. A developer preview gives you early access to new features of Shopify so that you can build and test your apps against upcoming features before they're released to merchants.

I completely understand where you are coming from and will add a feature request with the idea of the search incorporating the different languages for stores as you touched on.

Thanks for your response. Regarding the multilingual feature available today as developer previews, will that feature offer a 100% multilingual solution? Are you able to offer any insights as to when it will be available for public use? Unfortunately, as I mentioned, apps will not solve the problem, for me at least. And managing two stores is not favorable (imagine introducing yet another language to the store at some point). Plus if Shopify is releasing a built-in solution soon, then it makes little sense to invest time in these incomplete solutions now. Frankly I just want to evaluate if I should wait for the release of the built-in feature (given that it will solve the issue and has a foreseeable release date) or if I should seek other alternatives.

I completely understand where you're coming from but I am unable to give any more information about this. Your best bet is to keep your eyes peeled for upcoming announcements about future product releases such as this.

I feel the pain too.

Need to have multi-language support for my shop and was shocked when I found it isn't natively supported.

Spent two days to go through the theme translation with Langify and boy it is super error prone and I had my fingers crossed as to not break anything with my translations.

Will the out of the box Shopify provide such a feature in the near future?

If not, I'm seriously considering to switch I haven't yet launched my shop so it is still time though I enjoyed Shopify: simple and fast.

I added the "snippet" code from Langify to have the "language" but it stays either at the very top or at the very bottom.

Surely must there be an elegant solution to have the button perhaps located near the "Powered by Shopify" or better yet.

Any suggestions for this problem? See screenshot below. 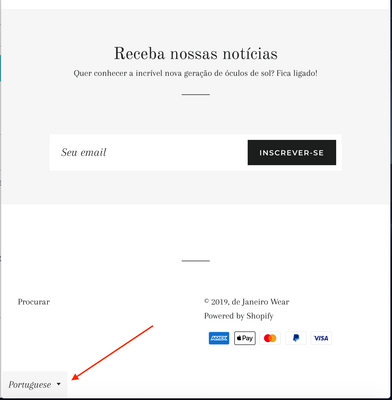 Would be really really grateful for an answer here.