I've been scheduling same day pick ups with UPS for years using the Shopify order page.  Depending on what time I am scheduling, I can choose pickup times late in the same day.  That's the whole point of "On Call Pickups".

Today, I printed a label at 10am and went to schedule a "On-Call" pickup, like I do nearly every day of the week.  The only choice it gave me was tomorrow from 8am-12pm.  There was no choices for today and only one time slot choice for tomorrow.  I have UPS trucks running in my neighborhood all day, every day, so it's not a scheduling conflict.  I contacted Shopify support but as usual, they were of absolutely no help.  They said it could have something to do with weather or traffic.  LOL

Something is definitely wrong today.  Has anyone else run into this issue?  Thanks.

We have the same issue, we’ve been doing afternoon pick ups for years. This is infuriating because we currently have a pallet full of boxes that have to go out today and no option to get them picked up

Did you call anyone about this?

I am waiting for resolution from the Shipping people to let me know what's going on.  I did go directly to UPS and was able to schedule an "On Call" pickup for today but they wanted to charge me $16 and I was not paying that since Shopify charges me $4.  This tells me that the problem is on Shopify's end, not UPS.

So, my packages are still sitting here while I wait for Shopify to get off their asses and tell me what's going on.

We submitted a support request but we have not received any response. We ended up having to walk dolly carts of packages over to a neighboring business to leave them with their pick ups. It's surprising to us that this change happened with no warning or notification from Shopify.

We're going to have to schedule a daily pick up with UPS and eat the extra cost while this gets resolved but its disappointing to see a change like this happen over night without warning.

Hi Britt.  Do you know for sure that this is something Shopify changed or is this possibly a glitch?I did open a ticket and they said nothing about a new UPS pickup policy change.   In fact they got back to me and said that my package weighed 200 lbs and that's why I couldn't get a UPS pickup. My package only weighed 5 1/2 pounds not 200. I called BS on that to them and they have not gotten back to me the second time.Shopify sucks at fixing problems. Cary
527 Views
0 Likes
Reply

This is a screen capture of my shipment that Shopify Shipping Department claims was over 200lbs.  Clearly you can see that it weighs 5.5lbs.  This excuse was after they said it could have had something to do with the weather or traffic.  I explained to them 3 times that the only choice I got for pick up for the rest of the week was 8am-12pm.  It gives me no more times to choose for any day of the week.  This is so typical of Shopify.  90% of the time, I am left to solve my own problems.  And rarely do the Shopify "Gurus" that monitor this forum ever chime in to offer solutions.  I have considered moving to Big Commerce for a couple of years.  This shipping screw up and the fact that they have no idea how to fix it might be the last straw for me. 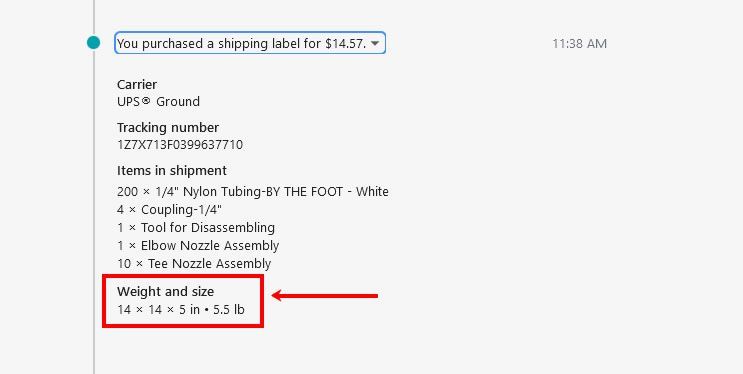 Day 3 of not being able to use the UPS "On Call" pickup scheduling!!

I cannot believe that I am the only one having this problem.

We are having the same problem. Up until this past Monday, I was able to schedule same day pick up between 3-4 pm. Now I only get tomorrow from 8 am to 12 pm. Does not work for us.

Have you opened a support ticket?  It's imperative that you open one if you haven't.  And don't let them tell you that it's because of weather or traffic.  That's what they initially tried to tell me.  It was insulting that they thought I was that stupid.

I just heard back from support.  Their answer was EXACTLY what I expected.  This "On Call" feature will no longer be offered.  Support said it was a mistake and an error that it was ever offered and when UPS upgraded their software, it found the error.

So, UPS "On Call" will no longer be offered.   Shopify would probably have to pay UPS a little more to have this option, but like everything else, they won't and we suffer.

We are having the same issue. It is unbelievable that Shopify would simply remove this feature and not tell anyone.

Yea, Shopify told me that it was a mistake and that it should have never been offered to begin with.  I call bullshit on that.  It's been there for too long.  Depending on where your pickup is, the "on call" fee can be as high as $20, so I think Shopify was losing money only charging $4 for this feature, so they removed it.  I did contact ShipStation and after being ignored for 7 days, I finally got someone to answer me.  They do not offer an "on call" UPS pickup either.

The only way around this is to schedule your UPS pickups a day in advance.  This sucks for our customers that need something shipped out the same day and it has to go UPS.  We can no longer offer that unless we go to the UPS website and schedule the pickup there, which costs me $16.90 as opposed to $4.

I wish more people were raising hell about this, not that Shopify would give a damn.

Even my UPS driver is complaining, they said they wont do "Same day" pickups.

I told them thats okay, but really even if you do next day pickup it should still give you more time frame options which is doesn't

look at these images

I wouldnt be available during those time-frames.

JewelryFreak, you've actually got one more hour than I do.  I only get 8am-12pm.  I have such a good relationship with my UPS crew locally that the supervisor called me the first time I scheduled an 8am-12pm pickup and asked if I really wanted them at my location no later than 12pm.  I told her what was going on with Shopify and she told me I was the 3rd person she called.  She made a note on my account that any scheduled pickups would need to be late afternoon.  Luckily, I have this relationship with these people here.  Otherwise, I'd have to have the packages ready by 8am.

I honestly believe that Shopify is lying to us.  This feature has been available for too long for it to have been an oversight.  I think Shopify just doesn't want to pay extra for these "on call" pickups.  Make sure you check the UPS website to see what it would cost you to schedule one through them and not Shopify.  Unfortunately for me, it was $16.90, but that's not the case everywhere.

The thing that pisses me off is that when I called in to support for this, they tried to tell me I couldn't schedule the pickup because of weather or traffic problems.  Then they tried to tell me that the package that I was having picked up weighed 200lbs, when it clearly shows 5.5lbs, and Shopify support had the order number, so they were just lying.  The weather and traffic excuse was so stupid, it was insulting.  I'll be looking to move my store when my season is over this fall.

Same problems here, SO ANNOYING.  We've started scheduling a pick-up every time we process an order, and we just pick the next available day .... so we have them scheduled 5 days out, always.  It's a gamble that we'll end up wasting $4 somewhere along the way, but at least we know we are covered.  Shopify is making a KILLING on this process ... $20/week for a daily pick-up, which should really cost only half that, or less.

GinghamNC, email me at sales@deadflyzone.com.  I have a solution for this that I'd prefer not to share in a open forum.  I think you will like it.